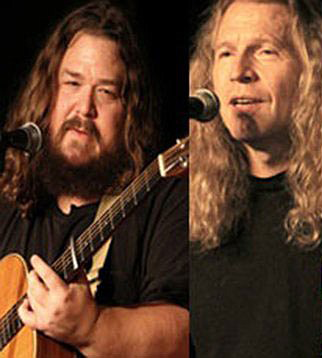 For the last two decades Jeff Berkley and Calman Hart have been entertaining audiences with their natural down-home humor and masterfully-crafted songs. In 2018, they celebrated their twentieth anniversary with a live performance of their debut album, Wreck ‘N Sow. Released in 2000, Wreck ‘N Sow was a critical success out of the box, winning the San Diego Music Award for Best Local Recording and helping Berkley Hart take home the coveted Best New Artist trophy as well. SLAMM magazine said of it, “Sometimes an album surfaces that is so emotionally and musically authentic that it crumbles resistance to its genre.” In the years since, they’ve played festivals, performing arts centers, and house concerts all over the country, recording another ten albums and winning several more awards along the way. In 2016 alone, they put out three albums: BHST (with Eve Selis and Marc Intravaia), A Berkley Hart Christmas, and Fleur De Lis, a powerful collection of twenty songs combining their trademark vocal harmony and unique acoustic style to create a listening experience that is, as one critic put it, “warm and peaceful as a summer evening on the bayou”. They have also become well-known for their theme-shows, most notably their productions of O Berkley Where Hart Thou, an old-timey tribute to classic Americana, and their recreation of The Last Waltz, a passionate homage to The Band’s 1976 farewell concert. In 2022 Berkley Hart are still doing their best to live up to that SLAMM review of 20+ years ago. Their latest release in 2018 While The Night Is Still Young won the SDMA for Best Americana Album. We’re excited to hear what they’ve come up with in the last few years!